The beauty of social media is that you can see what everybody else is eating and learn a couple things yourself. A couple of friends of mine are avid eaters and recently posted up a delicious looking sandwich on my Instagram feed. I immediately called up my friend Alex the next day to go check this deli out. Swiss 2 Go opened in March and judging from their score on Urbanspoon (100%, 40 votes), I wondered why I hadn’t heard of this place before. I knew the reason why as soon as I searched up the address to the place. The location is right on 118 Ave and 46 St, on the east side of town. Now I know this area isn’t the best location of all areas but to give the city credit, there has been a lot of work done to the east side; nevertheless, we made our way down to try it out. 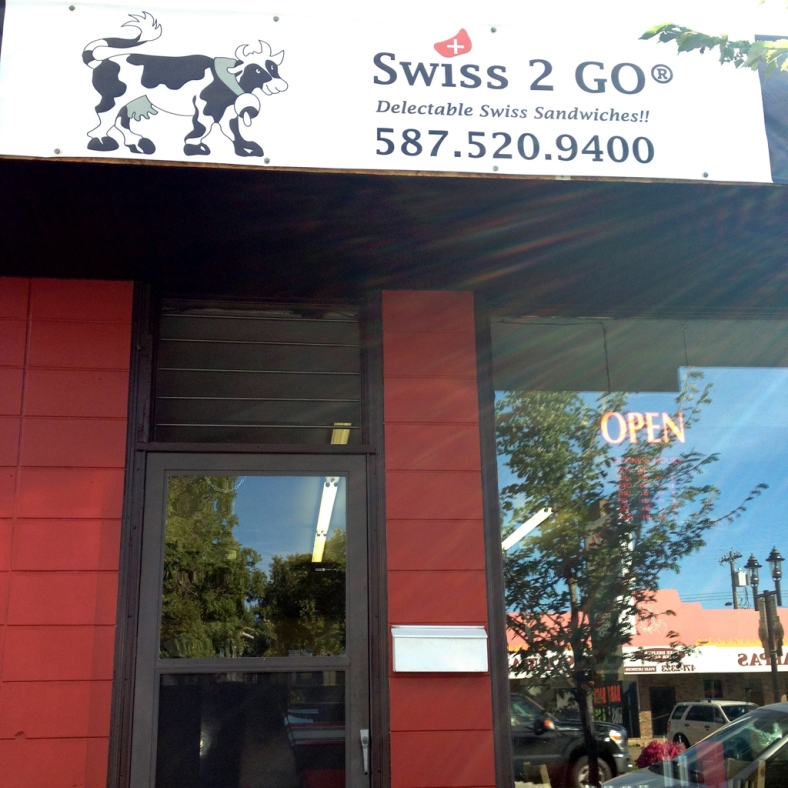 Walking up to the deli, it has a quaint entrance with seating outdoors for those who like to watch passerbys while they eat. Cute signage and flags welcome hungry patrons as they walk along the sidewalk. 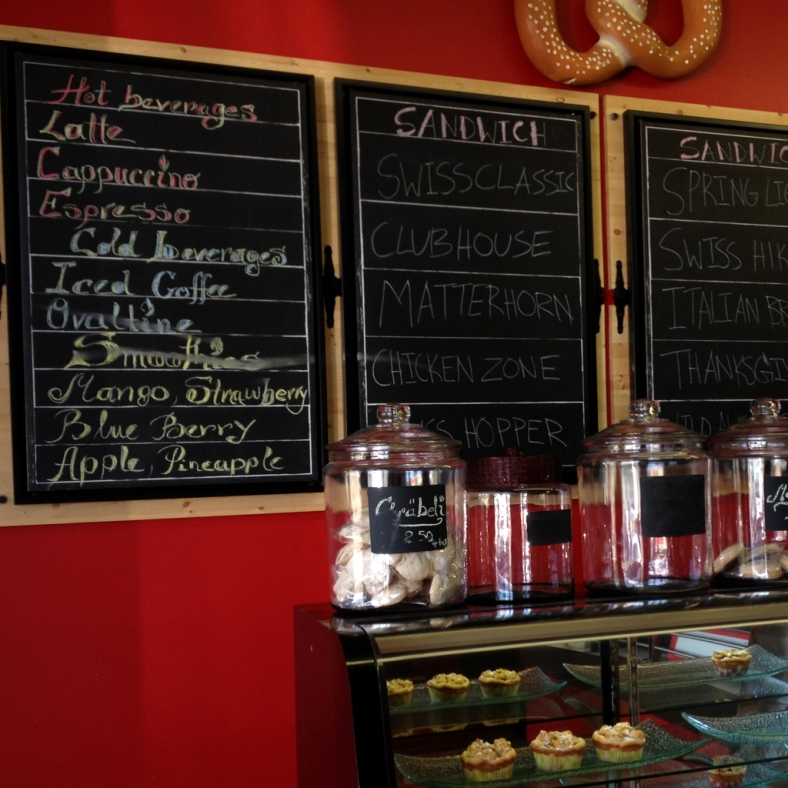 Map of Europe in Swiss 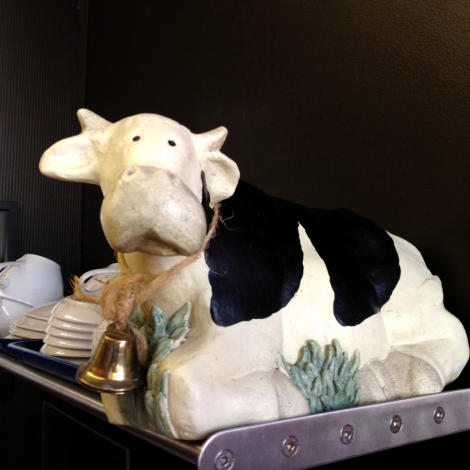 Once inside, there are a few tables to dine at and cute cow figurines representing the Swiss nation. The menu board is handwritten with the sandwiches of the month, as well as hot beverages. As soon as you enter and do a quick scan of things, you’ll be greeted by Drita, the owner of Swiss 2 Go. Simply printed menus are there with full descriptions of the sandwiches, which Drita told me will change every couple of months. She also encouraged feedback through their Facebook page and any sandwich suggestions are welcomed. Having browsed through the menu, Alex and I decided on sandwiches and ordered. 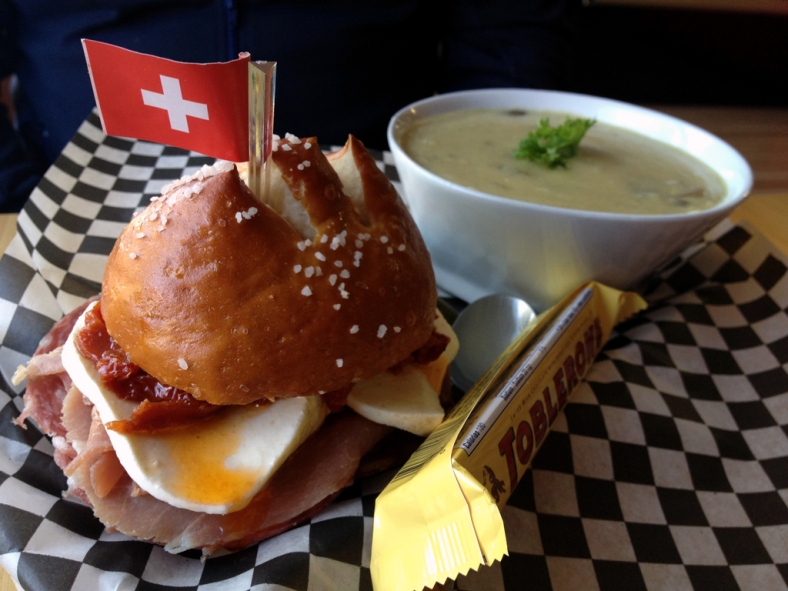 Alex ordered the “Swiss Hiker” consisting of fresh boccocini, Italian salami, proscuitto, sun dried tomatoes drizzled with extra virgin olive oil and balsamic vinaigrette. The soup of the day was cream of mushroom and the combo came with a small Toblerone bar as well. For $10.99, we both thought that this was a steal! Presentation was super cute as both of our sandwiches came out with a little Swiss flag. The soup was extra creamy and had a hint of an herb.. which I forgot to ask about It was, hands down, the best cream of mushroom soup that I’ve ever had.

Considering that I had a dinner to attend in mere hours, I settled with just the sandwich and stole a couple bites of Alex’s soup. I chose the “Wild Alaskan Salmon” sandwich with tomatoes, purple onions, alfalfa sprouts, sliced cucumbers, and dill creme. It was such a filling sandwich! Both sandwiches are made from a homemade pretzel dough, baked fresh early in the morning and almost 3 – 5 times a day, depending on their orders. To me, sometimes deli meat sandwiches are just mundane and everyone (and anyone) can go buy and make their own sandwich. But I must say, this bun was something else. Although a bit tougher than other breads (expected, it’s pretzel dough), the amount of bun to toppings ratio was done quite well. The salt sprinkled on the top was a nice touch!

Luckily for us, Drita said that all newcomers got a free cake. Now I’m not sure if it was because I’m snapping away on my iPhone at every angle possible so she was being nice to us, or if this was a real deal. Either way, both of us jumped at the chance to try their pastries! Being a staple in Swiss, we both tried the streusel cake but different flavors: Alex, the apple, and for myself, the blueberry. Both were made from the same pastry dough and both had a custard filling in the middle. By the end of the meal, we were both stuffed. Alex, who had intended to have a “light snack”, was very satisfied, and for myself? Well, I worried about how my stomach would handle a dinner within the next couple of hours. It was a delight to have tried Swiss 2 Go. I would highly recommend this place for a quick (but very filling) eat and for great value! The deli does offer catering and Drita hopes to open another location in the downtown area in March-May of 2013. I personally think this business will do well in the downtown lunch scene. This is no ordinary sandwich! I wish Drita and her staff best wishes and many sandwiches in their future. And for sure, Urbanspoon does not lie. With my vote, that makes 41, 100%. (42, 100%, by the time this post was published actually. The other vote was most likely Alex’s.) 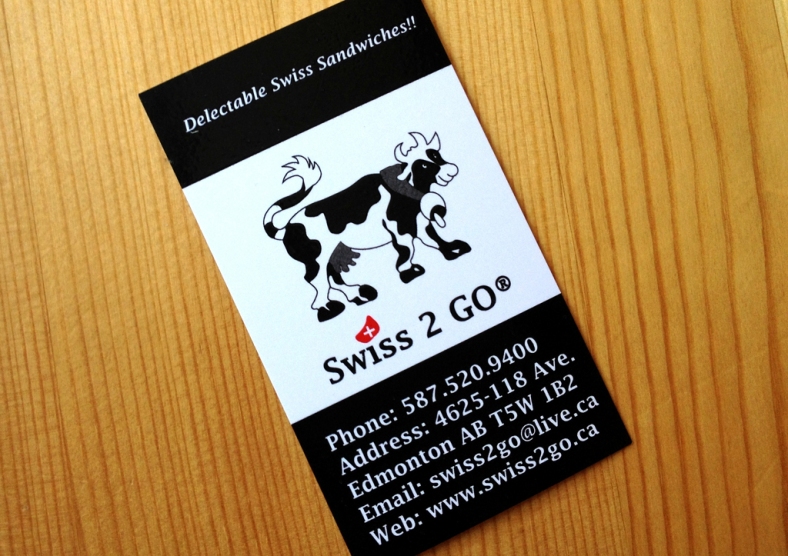 One thought on “Swiss 2 Go”