My food obsession actually started the day that we added the Food Network Channel to our TV line-up. Previously, I was watching HGTV religiously, following the likes of Sarah Richardson and Mike Holmes. One of my favorite shows on the Food Network is Top Chef, where chefs from across America compete in culinary challenges to get the title. When the first season of Top Chef Canada aired last year, you can bet good money that I was in front of that TV set watching every episode. These are Canada’s chefs, so close to home! It wasn’t a surprise then that 3rd place contestant, Connie DeSousa, would co-own a restaurant that made this year’s list of top 50 best restaurants in Canada by Maclean’s. When Joe and I decided to do a quick trip to Calgary for the weekend, CHARCUT shot up the list on things to eat! 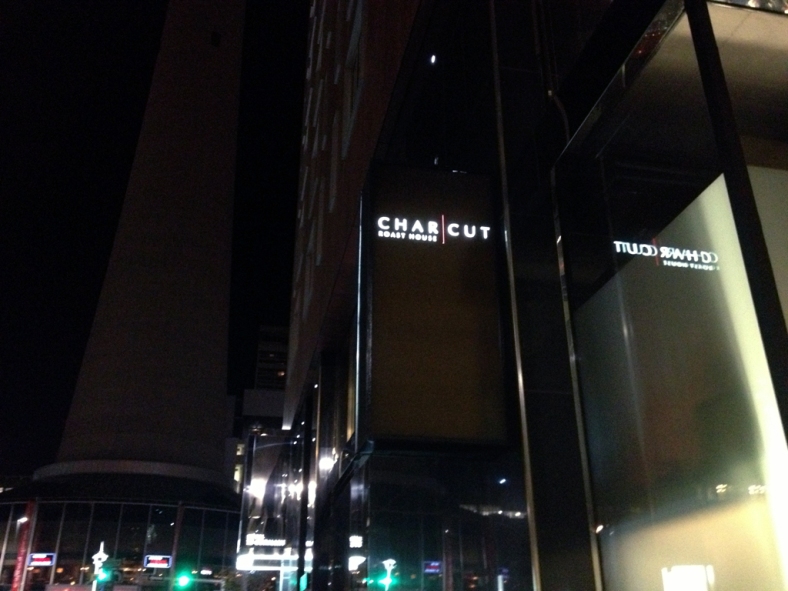 We did not make reservations until we were in the city but managed to grab a 9pm reservation. This was actually changed to 10pm after our stint at Pho Pasteur. With already an early dinner in our repertoire, I could only pray that my stomach would empty quickly so I could order multiple dishes at CHARCUT. Located right in front of the CN Tower in Calgary, it is the place to eat in downtown. Guests occupied every table, even at 10pm, most finishing up on their last bites or starting dessert.

Changed daily, the menu at CHARCUT features what’s fresh for the season and the chefs’ creations for the day. I had eyed the online menu, dated September 26, 2012 so it threw off my game plan when I saw the October 6, 2012 menu. Even with only a handful of dishes changed, it took a good ten minutes to reconsider what I wanted to try. Meanwhile, Joe ordered off of their extensive beer menu, which featured local and Canadian breweries. Our server was very knowledgeable with the drinks and the food menu and was joyful, even on the last leg of the night. He mainly pointed out that the house-made sausages and cured meats were their specialty and were a favorite among guests. Knowing that we couldn’t eat absolutely everything, we sadly opted out of this part of the menu to try the other dishes. We quickly ordered (or I did, Joe was still full from our pho dinner) and awaited for the culinary experience. 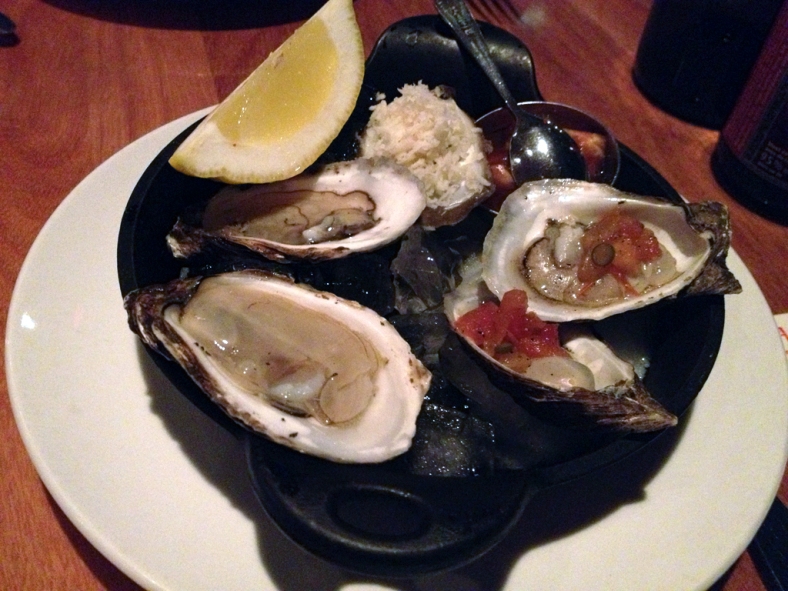 Joe’s choice for the night were the East Coast oysters which came BBQ’ed or chilled. Ordering two of each to try, they came out beautifully presented. I’m not the biggest fan of oysters (I don’t believe I’ve tried enough to love them… yet), but I did enjoy the BBQ’ed ones which were already topped with smoked tomato and a pickled wild ramp mignonette.

Preferring a lighter dish as to not destroy our stomach with too much food, we had the fried chickpea and Persian cucumber salad next, served with pickled peppers, wild arugula, and lemon. The natural peppery taste of arugula was enhanced by the seasoning of the dressing and the fried chickpeas delivered a nice crunch to the dish. For some reason, I only had one thinly sliced cucumber with my ration and unless Joe had more, I wished there were more to cut down the pepper taste. 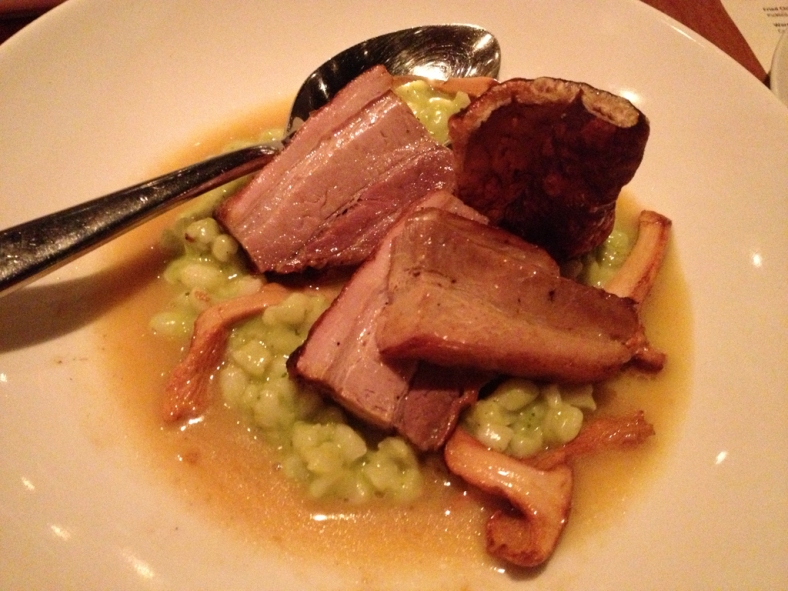 Our main dish for the night was Spragg Farm’s roasted pork belly served on top of aged cheddar grits, arugula pistou, and pork crackling. It was delicious! I really liked the grits and the sauces which balanced out the saltiness of the pork belly. The addition of mushrooms was an added bonus!

Side of Duck Fat Fried Poutine

As a table side, the duck fat fried poutine came out simultaneously. Our server had already warned us that the sides were actually quite large and one was enough to share between the two of us. With fresh cheese curds and a truffle gravy (mmm, truffle…), this made the dish wonderful. You can’t go wrong with fried potatoes, cheese, and gravy, with the addition of rich duck fat and truffle flavor. It’s probably impossible. Just reliving the moment is making my mouth water. I have to admit though, we could not finish the dish. With the pork belly to finish off still, our palates were overwhelmed with salt. This was expected and in hindsight, I probably should have ordered a lighter entrée if I wanted to polish off the poutine! Lessons for next time.

Blueberry Cheesecake in a Jar

You can’t have a complete meal without dessert, even if your tummy is cursing you for putting it through so much. To share, we ordered the blueberry cheesecake in a jar. Something about “in a jar” will always catch my eye! Normally a dense cake, this dish was surprisingly light, most likely because the vanilla bean cheesecake was in a mouse form and the toasted graham crumbs were layered between. We even took a break in the middle of dessert to relax and our server nearly took it away! (No!) He apologized and laughed at our eating strategy and continued to clean up the tables next to us. 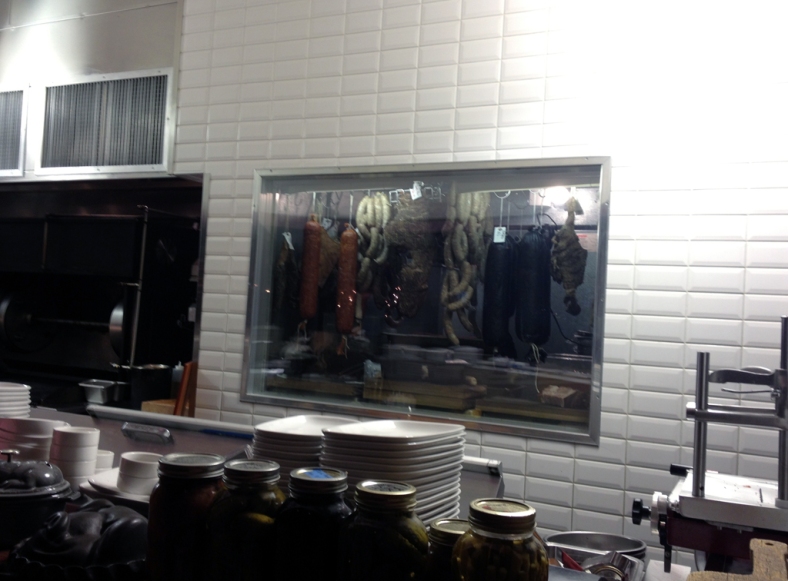 With most of the restaurant emptied, I was able to take a closer look at the open kitchen with their in-house sausages and meats displayed. Sadly, I did not catch a glimpse of Chef DeSousa, but maybe on my next visit I’ll get to see her. I would definitely return to CHARCUT and plan on doing so on my next visit to Calgary. Absolute loved it and had a fabulous time!

One thought on “CHARCUT Roast House”