The Boudin Bakery Museum was one of the highlights of the trip for me. A little sad that I get excited over such a thing, but I was really curious to know why Boudin was such a big name in San Francisco, and what was going on with their sourdough bread. 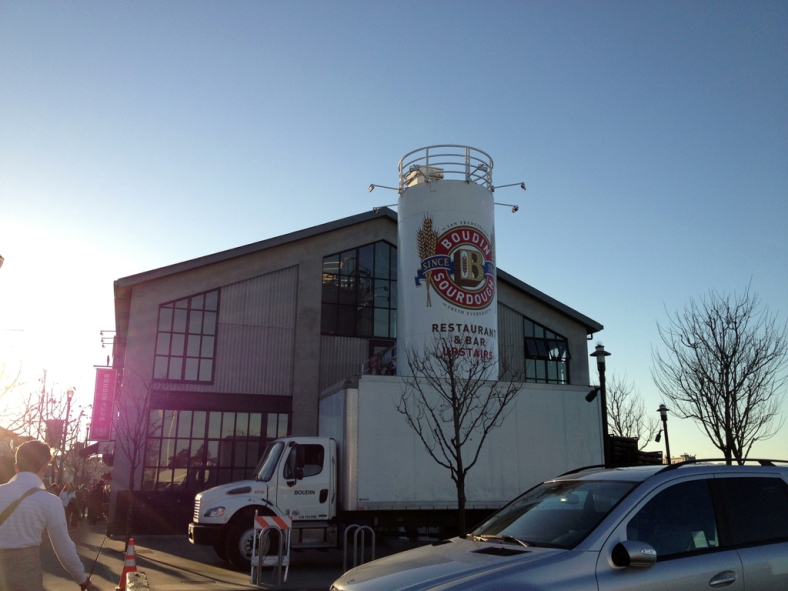 Boudin Bakery at the Wharf 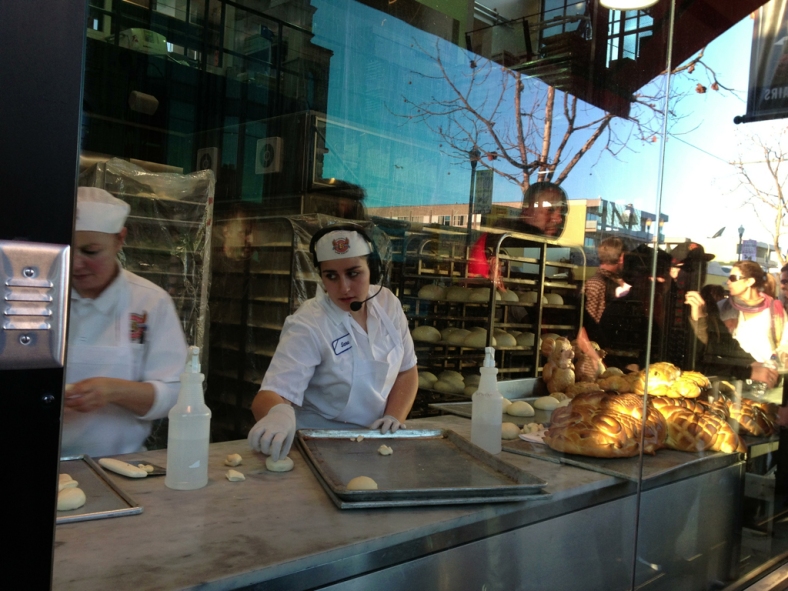 Along the outside of the bakery lies a 30-foot window where you can watch the bakers make the bread by hand. Some are simply made into rounds, while others are handcrafted into cute creatures, such as San Francisco’s infamous Dungeness crab, turtles, bears, and fish. If you have questions, you can go ahead and ask any of the workers there, and they can respond via a microphone system. 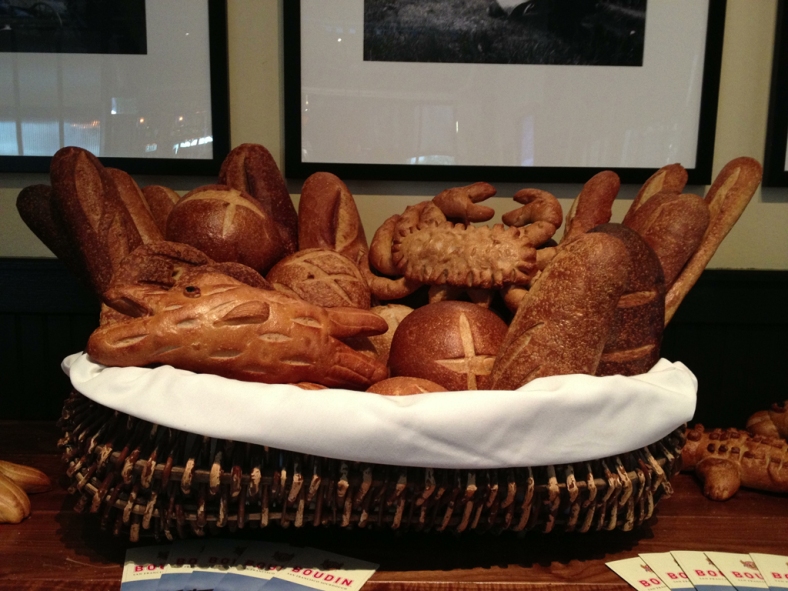 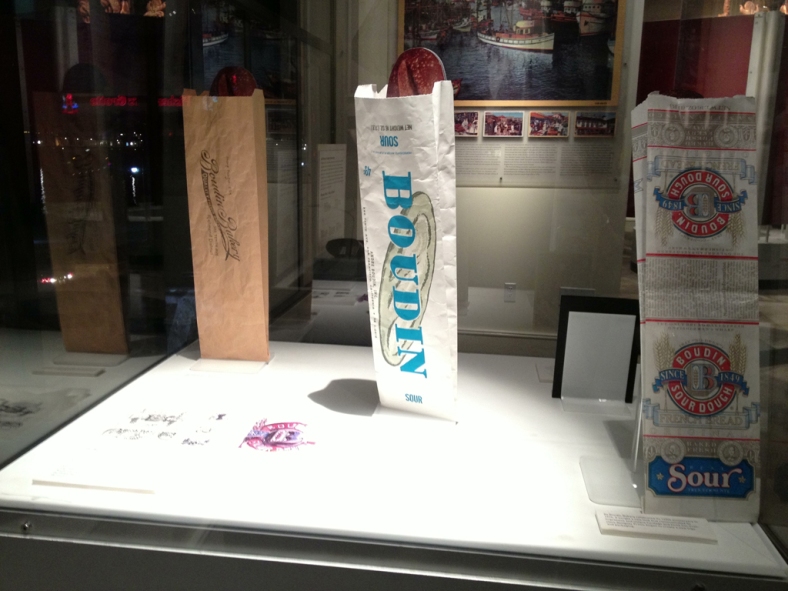 Above the bakery and the café, lies the bistro and the museum. The museum is self-guided with a fee of $3 per person, which can be easily (and happily!) waived. I won’t post everything I learned here, as that would deprive you much of the fun if you were to go yourself. Some interesting points: the history of how the French family of Isidore Boudin came to San Francisco during the California Gold Rush, the development of the starter dough, changes in the company’s logo as a result of a changing into Italian hands, and changes in delivery as demand increased across the nation. 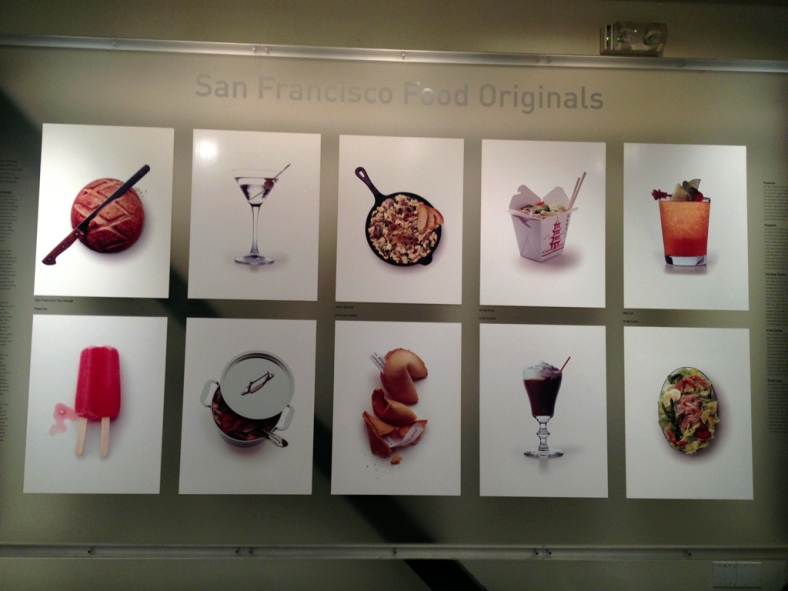 Other bits of history are throughout the small museum as well, including a wall dedicated to San Francisco’s food originals! Can you guess some of them? 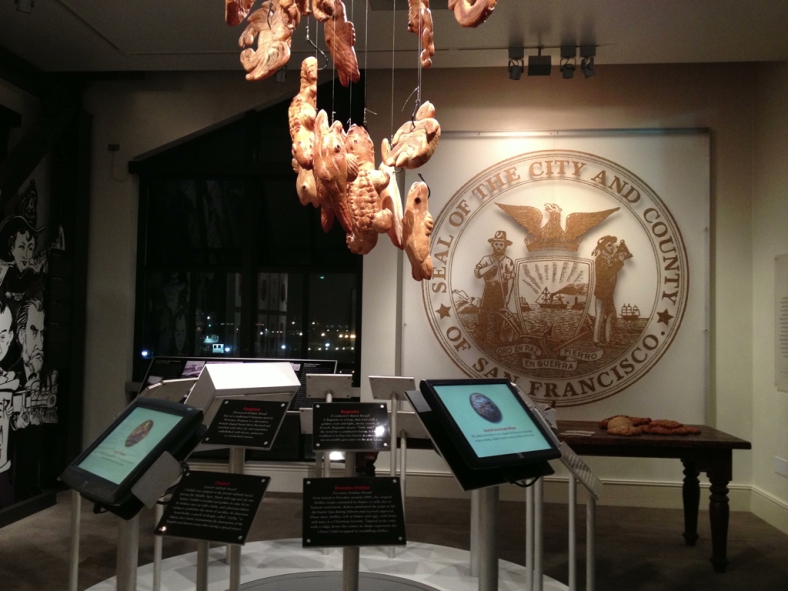 A lot of the museum was interactive as well, making it very family friendly. I wonder why my mom, secret lover of food, never took me here when we visited!

Okay, most exciting part! What’s the secret? It’s the FOG. San Francisco’s fog that comes around during what would normally be the hottest months of the year, makes a hospitable environment for wild yeast and Lactobacillus sanfrancisco (I kid you not) to grow with a symbiotic relationship. The wild yeast that only San Francisco bread has, Saccharomyces exiguus, is different from the commercial type used by other bakers. This species is unable to metabolize maltose, a sugar required by the Lactobacillus sanfrancisco to make lactic and acetic acid which is what makes the bread sour. In return, the Lactobacillus sanfrancisco releases glucose, happily used up by Saccharomyces exiguus, thus creating the unique flavor that only San Francisco bread can have! Science is so cool. 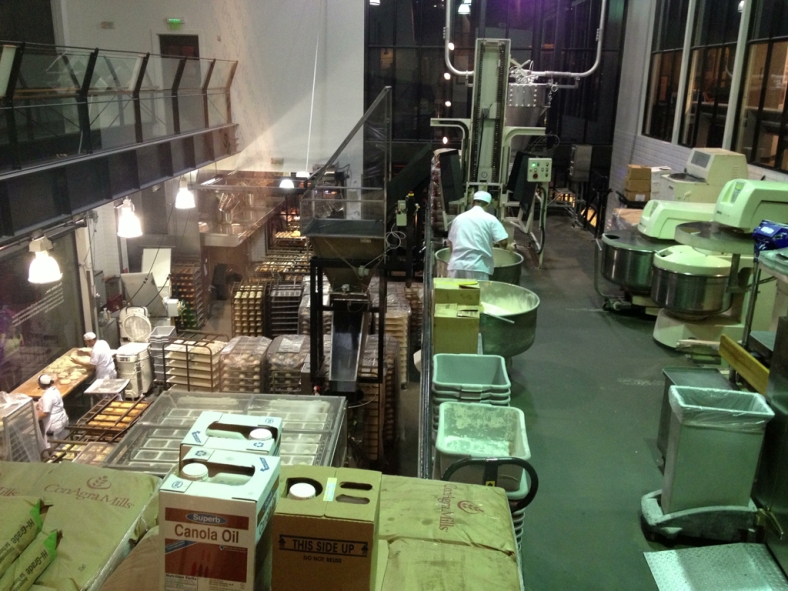 Next exciting part! Watching the bread being made in every step of the way! There are panels at each station describing to you what’s being done. We arrived just in time to see a finished batch of dough come out of the giant dough mixer. The mother dough, or starter, which has been kept alive for over 150 years, is kept in a refrigerated vault. For each batch, bakers take a bit of the mother dough, mix it with water, flour, and salt (and nothing else!) and combine in a giant mixer. 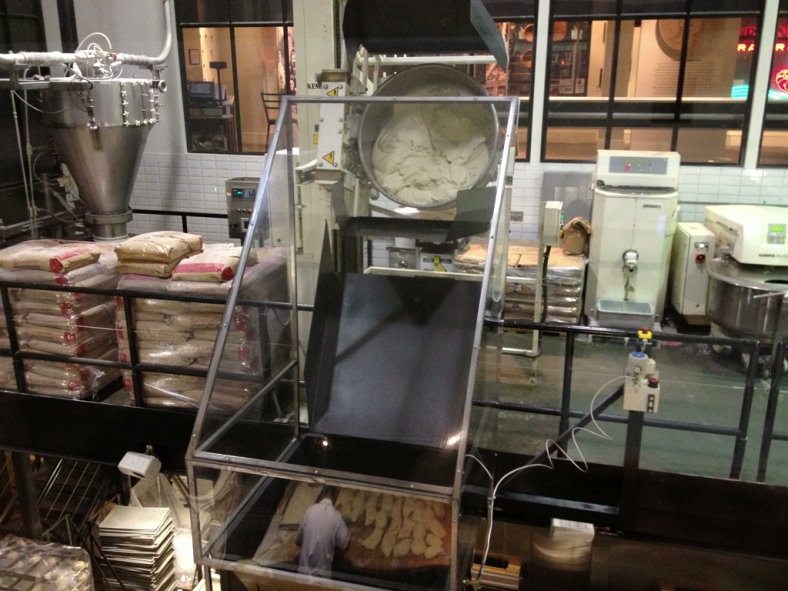 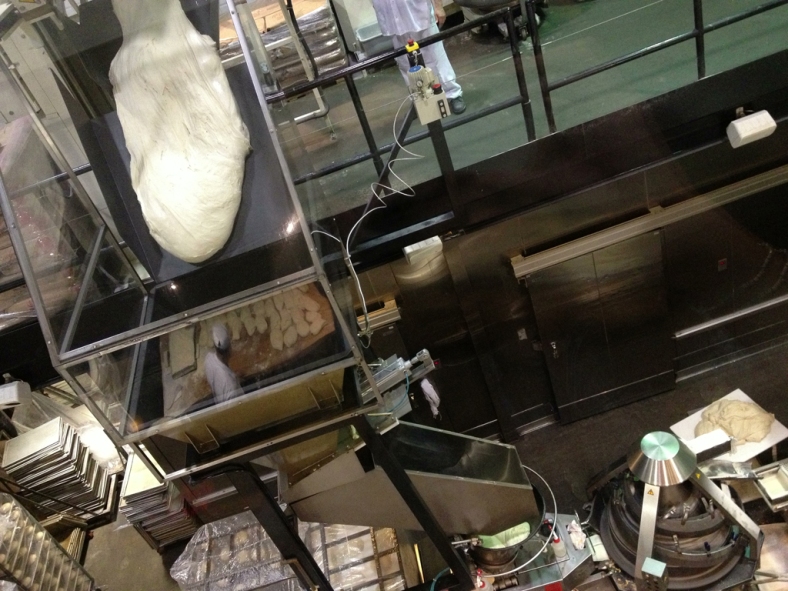 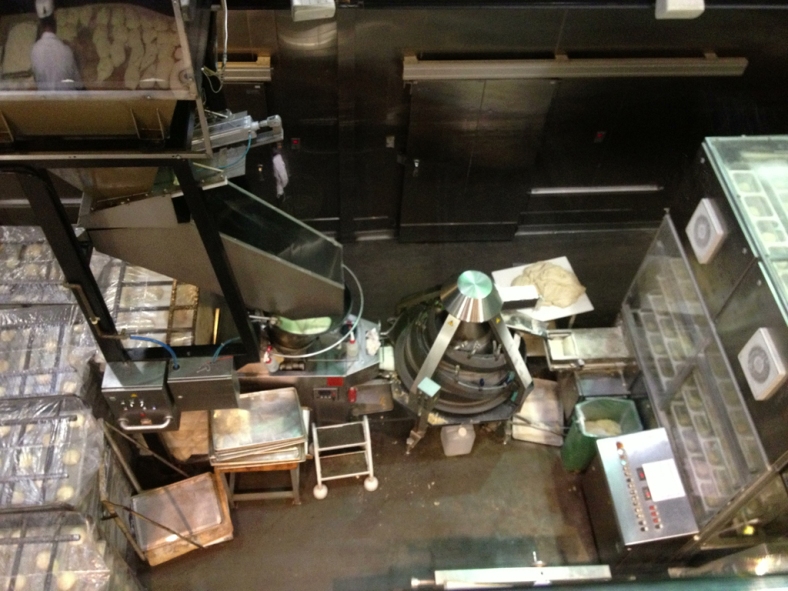 Divided and into the Rounder

The dough gets transported to the lower level of the bakery and into the hopper, where it gets divided into 50-lb pieces and into the dividing chamber. The dividing chamber, divides the dough into further smaller pieces to be rounded out in the cylindrical device, appropriately named, the rounder. This makes a smooth surface, making it for even rising when it goes into the proofer. 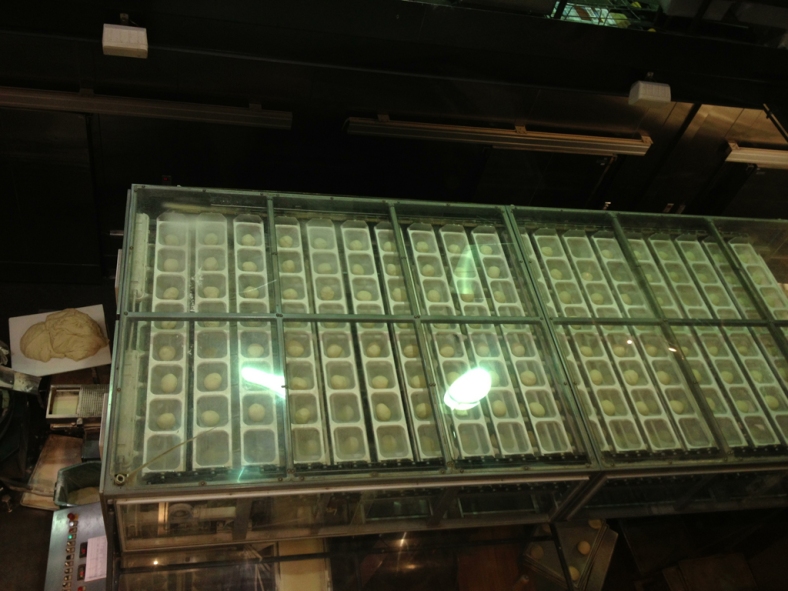 The intermediate proofing station allows the gluten to relax after being handled by the divider and the rounder. Without this short break, the bread would turn out tight and rubbery. 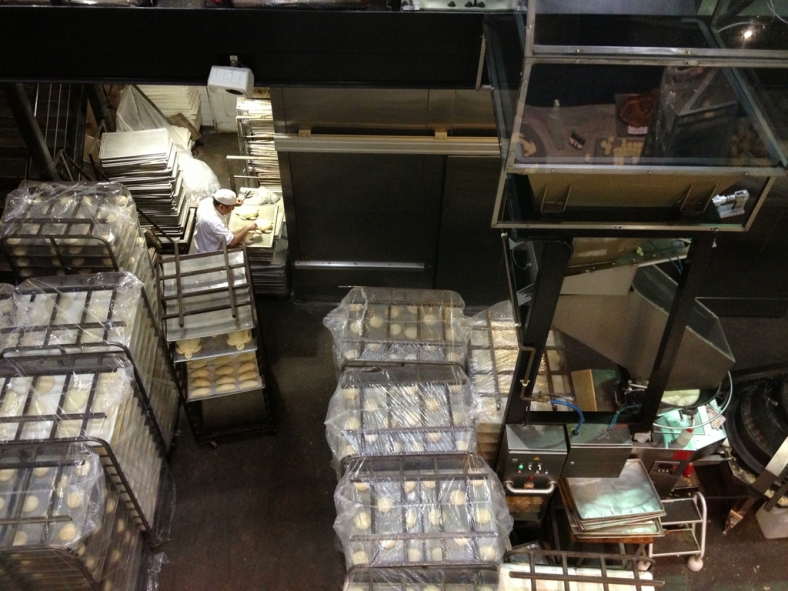 The dough then goes through a molder where it can be made into long baguette or other shapes of long bread. It can also go to a different rounding machine to make the traditional round loaves. Once shaped, they’re ready for the refrigerated retarding cabinets where they wait and ferment, further developing that sour taste. They’re then moved to the proofing cabinets for one last proof, rising double in size. 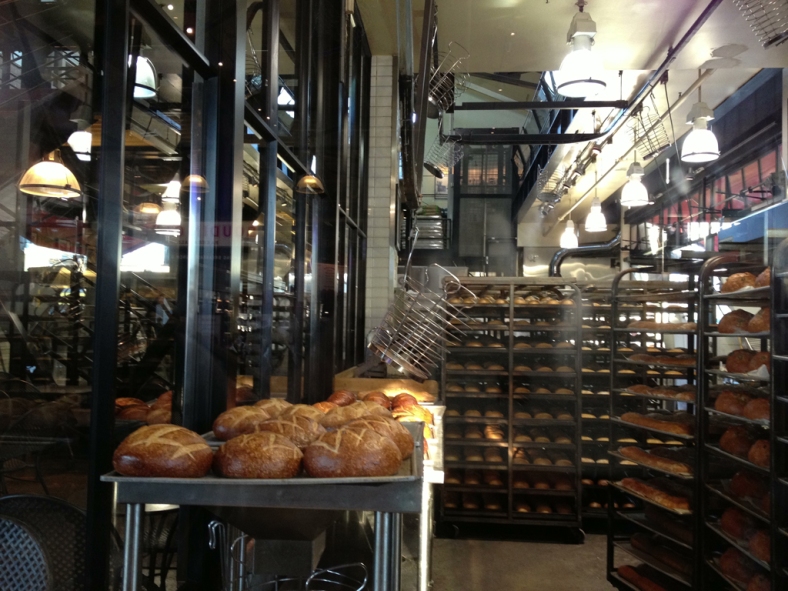 Out of the Oven

Off into the oven they go, and out comes fresh bread! The bakery had a cute transport system with wired baskets flowing throughout the entire building. Fresh bread would be placed into the baskets… 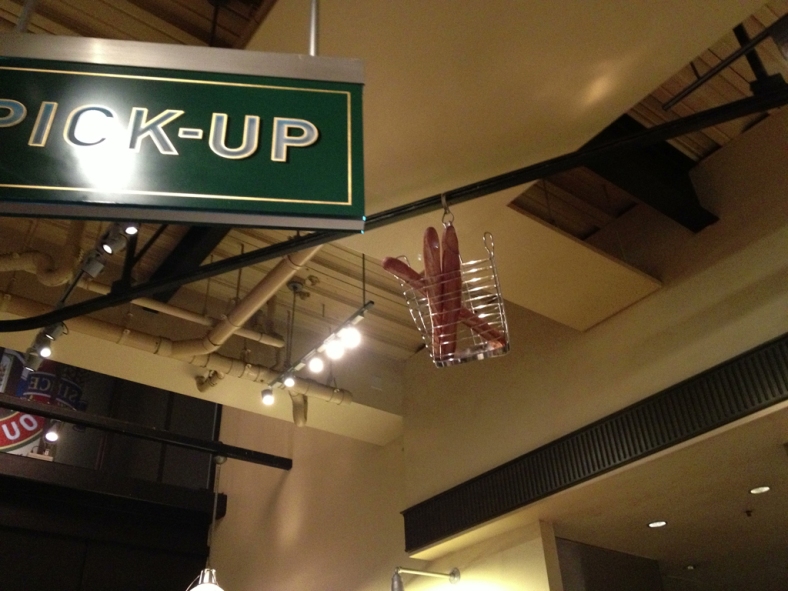 Transported to the Bakery 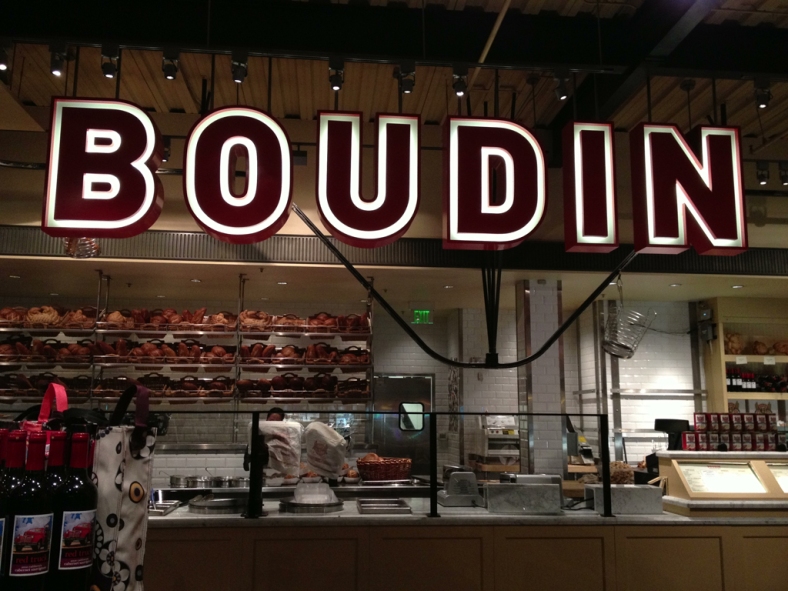 … and voila! Delivered to the cafe to be sold to customers! It’s all pretty exciting to see sourdough bread being made in a larger scale! 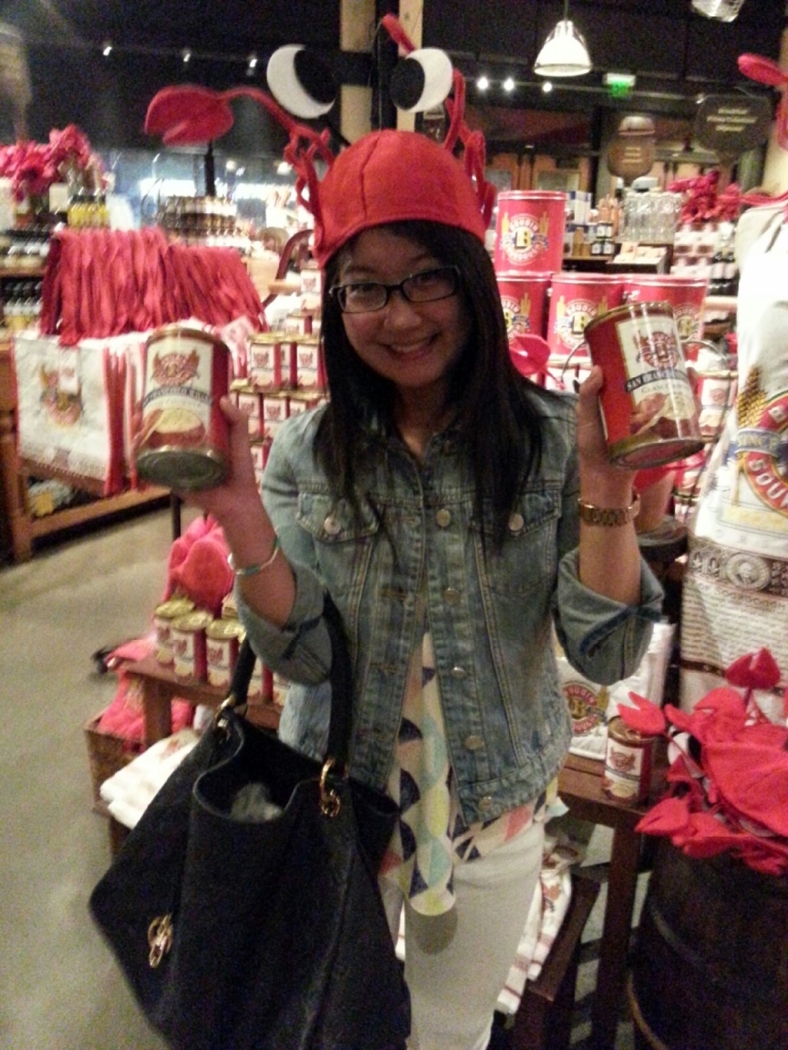 Having Fun at the Baker’s Hall 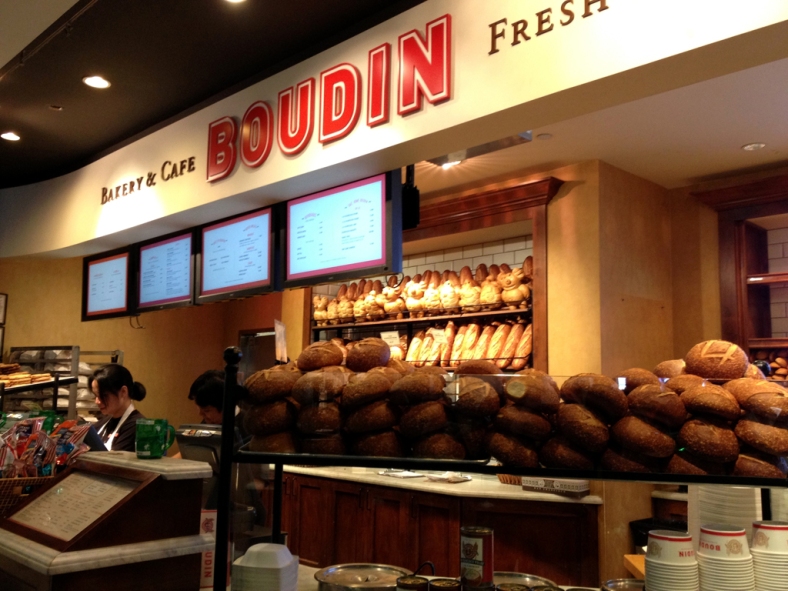 Boudin at the Airport 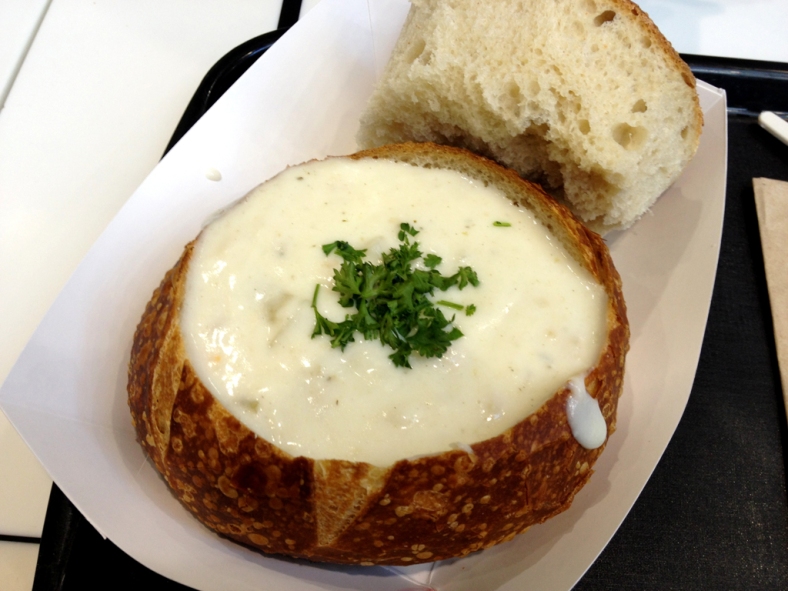 You can spend as much time as you’d like in the museum, and afterwards have a bite to eat at the café. I was on a mission to bring back as many clam chowder cans as I could for friends and family, and after seeing the museum, I had to add bread to the gifts! (Easily done, there’s a bakery in the food court in the main domestic wing at SFO). Don’t forget to try the best of both worlds by ordering a clam chowder bread bowl as well! Delicious! My only regret for that night: not buying the crab hat!