Characters Restaurant was by far the hotspot this past week in Edmonton, hosting Taste of Iceland to promote the new Icelandair routes that take Edmontonians to over twenty destinations in Europe. Remember the #yeghunt debacle in January? Icelandair held a city wide scavenger hunt, with the spectacular prize of two roundtrip tickets to any one of their destinations. The three day event, with a prize every day, left me half a tank empty, an increased heart rate, and major disappointment when I was clearly not the winner! The event left me with a smile though and the marketing sure worked, making me want to visit Iceland even moreso than I did after watching The Secret Life of Walter Mitty. Beautiful scenery, volcanos, glaciers, and wildlife! So when Iceland Naturally announced that award-winning Icelandic guest chef Hákon Már Örvarsson was collaborating with Characters’ chef Shonn Oborowsky for Taste of Iceland, I had to go. What if this is my only chance to eat authentic Icelandic cuisine? Featuring fresh ingredients locally sourced from Iceland? I immediately texted my friend Alex, who of all my friends, appreciates travel, history, and culture the most. We ended up booking for Saturday evening, the last day of the event. 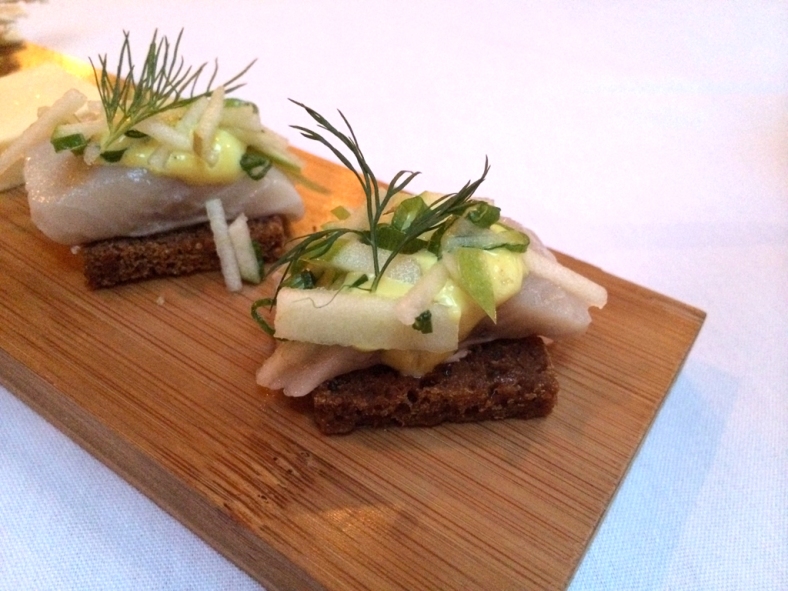 An 8-course menu was laid out before us for the Iceland feature menu. Characters regular menu was also available for the night, although it seemed most tables were there to try something new. You could also order the Icelandic courses separately, although cost wise it made sense for us to try all dishes for $60, rather than separate.

First of four traditional tapas style dishes was a duo of “Harðfiskur”, Icelandic dried-fish with butter and pickled herring on sweet rye bread with a curry dressing, green apples, and spring onions. The Harðfiskur reminded me of dried cuttlefish, an Asian snack. Unlike my childhood favorite, the  Harðfiskur didn’t have that fully shredded texture, but was a cross between shredded and a solid jerky. Took a while to chew but otherwise, very similar in flavor! The butter was a bit puzzling as it didn’t help texturally, nor added to the flavor. Chef Örvarsson confirmed that this was a very traditional dish in Iceland, very common in households. The pickled herring also had an interesting texture and as this was my first time trying it, I wasn’t quite sure if this was intentional. The bite came across as being very chewy, melding in with the soft rye bread. The curry dressing was the prominent flavor even though the fresh dill and crispiness of green apples and spring onions were there. 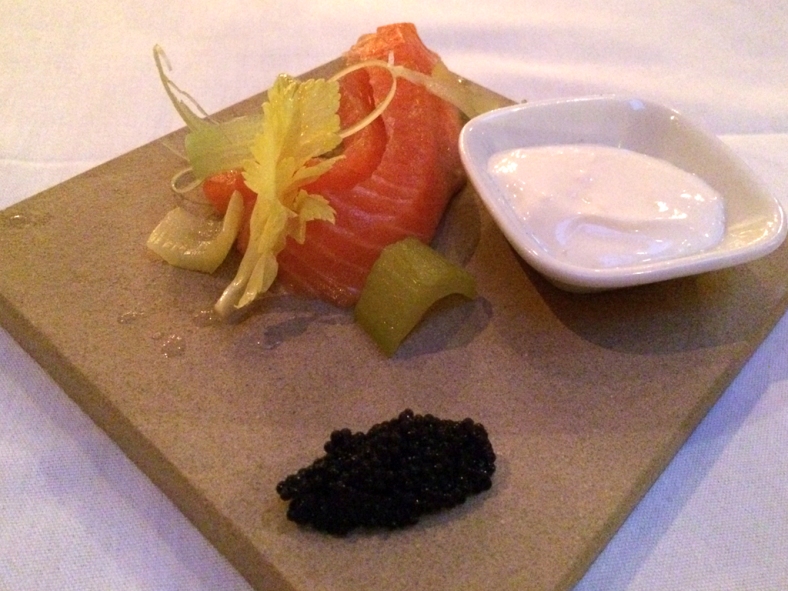 A cured salmon in “Brennivin” with lemon-sour cream, cress, and lumpfish caviar was our second plate. Brennivin is Iceland’s signature distilled beverage, boasting a 80 proof label. I would imagine if taken as a shot, it would probably knock me out, but the salmon was nicely flavored with it and complemented by the tart lemon sour cream. The caviar was rich and salty, a perfect trio.

The deep-fried crispy balls of cod and potatoes with “Söl” aioli sauce was spectacular. Alex nodded with each bite stating that Canadians would love this in bars. Crisp on the outside, warm and delicious on the inside. The sauce was mixed in with söl, a red algae seaweed, used in Iceland as a flavor enhancer. Think MSG in Asian cuisine. The texture of the bigger pieces were a bit thicker and chewier than your usual Japanese seaweed snack, but it was salty and yummy all the same.

Ending our tapas, a pair of langoustine tails, grilled, and plated with garlic and herbs. Absolutely decadent, rich and succulent, much like what you’d expect of a lobster tail. You can’t go wrong with a garlic and herb sauce either. 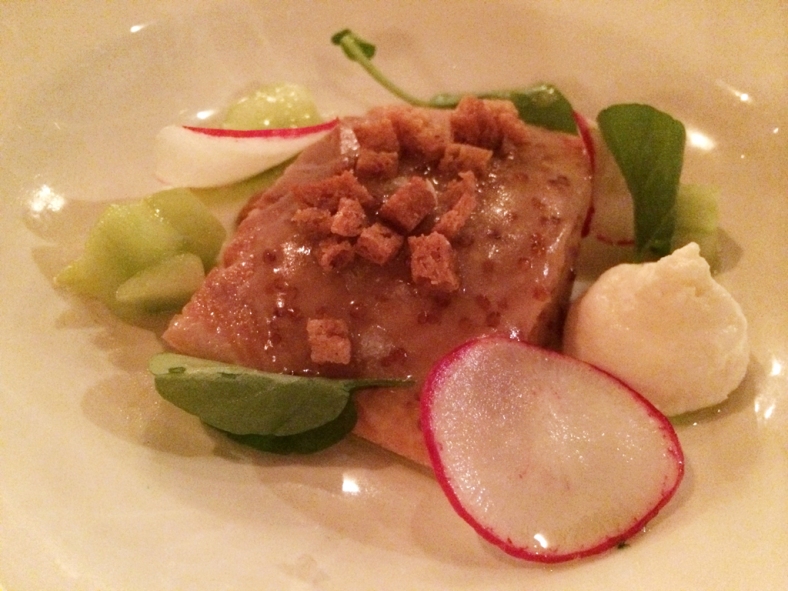 Two entrees followed, the first an Arctic char that was cold smoked. Beautifully unveiled at the table, the smoke arose and left your nostrils going, “Oh my, what’s that!” It smelled fantastic! Served with a honey-grain mustard dressing, flan of horseradish and drizzled with a dill oil, the Arctic char was a highlight for me. Alex found the honey-grain mustard dressing overbearing the Arctic char, but soon found that out to be actually the flan of horseradish nearby that gave him his surprising first bite. Crispy bits of honey brittle gave the dish a great contrasting texture. 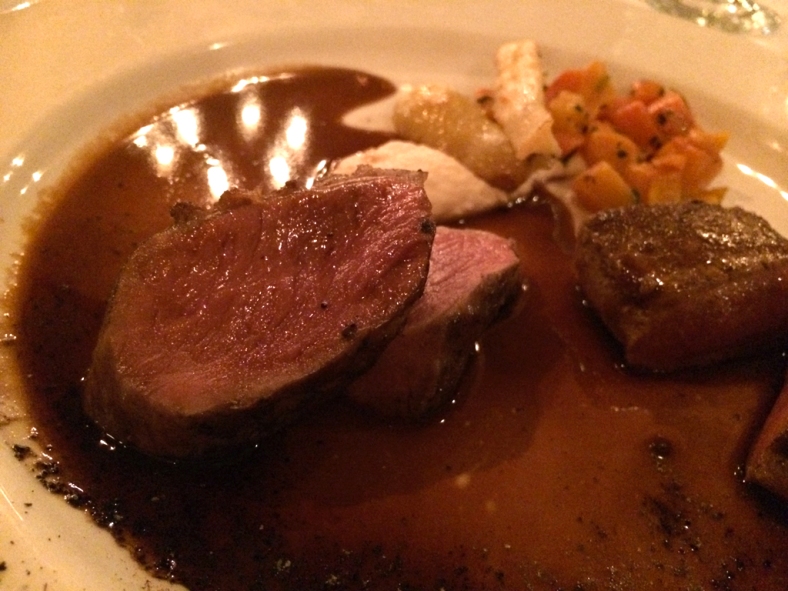 Second entree was a duo of free range Icelandic lamb and Alberta lamb, glazed root vegetables, celeriac puree, juniper berry infused lamb jus reduction and dust of dried wild Icelandic herbs and blueberries. When presented, our server told us which lamb was which, but we were so mesmerized by the dish that we completely forgot which side was what. It was interesting though, as this basically provided both Alex and I a blind comparison of the two. We both agreed we enjoyed the left side cut better, softer in texture although both were cooked to a medium rare. Comparing photos of Liv’s and Mr. Moo’s (both attended the media preview), it was clearly the Icelandic lamb that we preferred. Beautifully presented and the root vegetables were an excellent side. We confirmed with Chef Örvarsson regarding the duo, and I curiously asked why we had received different sources of lamb when the menu and past dinners clearly did not. Of course, they had run out! And not wanting to give us just two pieces of lamb, they offered the duo, which ended up being a great comparison! 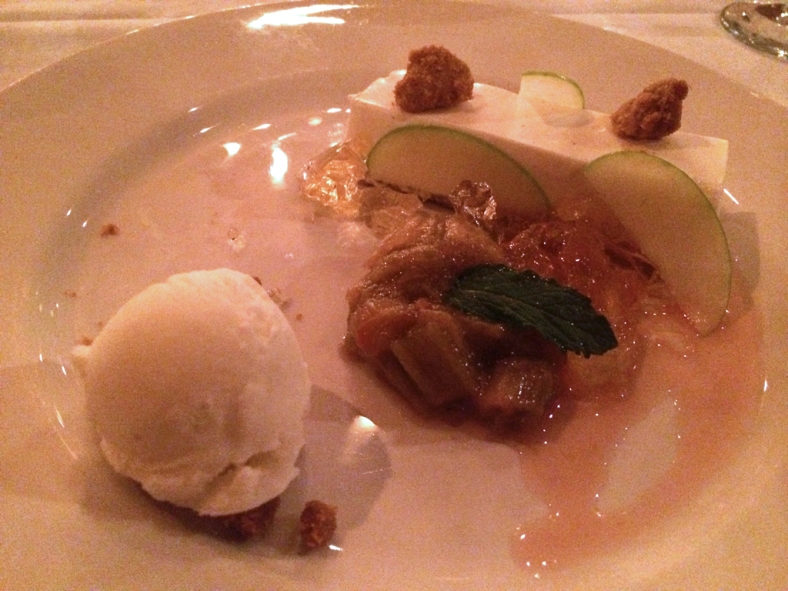 Skyr of the Vikings

Our meal ended with skyr, an Icelandic cultured dairy, similar in texture to yogurt. With roughly 12% in protein, this was definitely somewhere between regular yogurt and a Greek yogurt in terms of thickness, and paired with jelly of apples and crispy oat-hazelnut crumble, I can see why this is Iceland’s dessert of choice. The menu stated a cinnamon flavored poached rhubarb, to which neither of us received, although I suspect this was another issue of supply and demand. Instead, we received a compote of apples, fairly tart in the my opinion. Perhaps strawberries would have been a closer comparison?

Overall, our meal was spectacular. I thoroughly enjoyed the meal and appreciated the finer things of foreign cuisines. Characters hospitality was excellent, as they arranged for us to move tables for lighting purposes. The lighting, which was fantastic via a skylight, disappeared as the night went on, so I’m sorry for the decline in quality! An iPhone can only do so much. Taste of Iceland seemed like a success and it was wonderful to meet the humble, but proud, Icelandic Chef Örvarsson. Now I need to book a trip to Iceland!