Last week I got a chance to check out Edmonton’s own little corn tortilla factory, Tortillas El Mercado Inc. Opening their space to the public, the locally-owned business gave participants a behind the scenes tour on the production of fresh corn tortillas. As if a tour wasn’t exciting enough (learning about food really makes me happy!), Tortilla El Mercado were also selling fresh tortillas. Hot. Out of the oven. Tortillas. Where on earth would you get that? Mexico. That’s where.

Although established in 2009, El Mercado didn’t start selling commercially and operating until 2010. That’s how long they took to get the space up and running, with bringing Mexican machinery up to federal and provincial standards for food production as their biggest challenge. Since then, Tortilla El Mercado pumps out nearly 12,000 corn tortillas per day, sold to local restaurants (hello, Tres Carnales & Rostizado!) and a variety of grocery stores including Spanish Latin grocery store, La Tienda de Pasito on 114th Street & 112th Avenue, all Italian Centre Shop locations and select Save On Foods stores. Tortillas galore!

I had roped my taco-lovin’ friend Diane for the afternoon, conveniently joining Sharon and Mack and two others to make a small group of six. It was a good size as surprisingly, the factory itself was confined to one room and small enough to allow four or five workers at once. Our tour guide Karla was efficient, yet super informative of everything from the history of Tortilla El Mercado to every aspect of production!

Both Mexican white and yellow corn flour are imported from the States as buying directly from Mexico is a little bit tougher than you’d think. The selected flour, white to make white corn tortilla and yellow to make yellow corn tortilla, is then mixed with water in the mixer (pictured left) to form the dough. 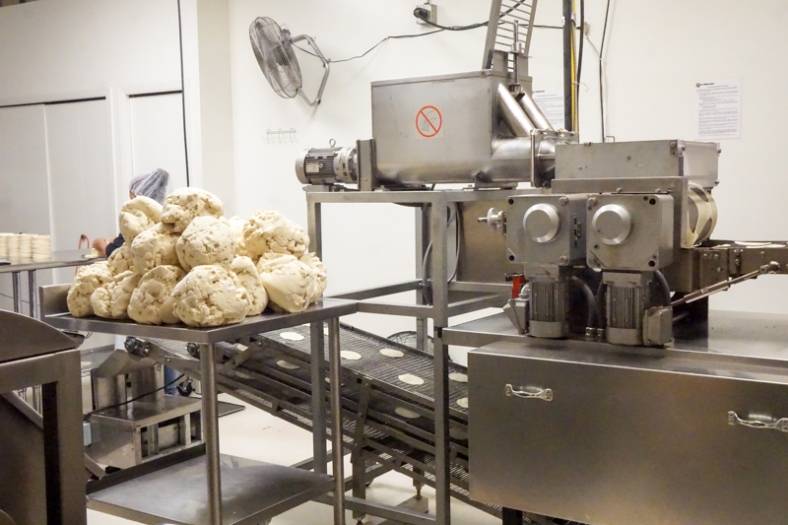 The dough is then weighed out and cut into sizeable pieces and loaded into the square feeder (pictured top centre) where it gets further worked and processed through rollers. Tortilla El Mercado offers three different cuts: regular (14cm) sized tortillas for main meals or to make quesadillas, chilaquiles, enchiladas, etc; taqueria (10cm) sized tortillas to make tacos, and triangles used for tortilla chips. Leftover dough gets recycled back into the machine so that nothing gets wasted.

Once rolled and cut, the tortillas are processed in the oven at three different stages utilizing three different temperatures. Tortillas are then inspected and any poorly cut and baked tortillas then hand cut and turned into tortilla chips, while the rest are weighed and packaged into bags for distribution. In 8 minutes, Tortilla El Mercado transforms a simple mix of corn flour and water into delicious tortillas.

Our group can vouch that they were indeed delicious, having a chance to try fresh out-of-the-oven tortillas. Karla showed us how to traditionally eat the soft tortillas with a sprinkle of salt and a quick roll with the hands. The texture was similar to a wheat flour tortilla (but it’s not folks, it’s gluten free!) and much softer than what you’d taste in a taqueria! Never having a fresh tortilla like this before, this was the highlight of the tour for me. 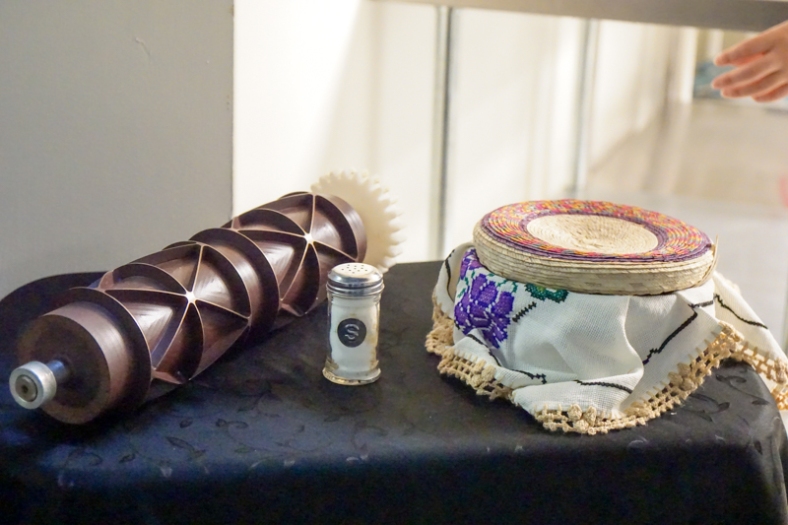 Currently the factory produces by order only which means that it operates usually two or three days of the week for eight hours each. If there are more orders than usual or more clients come on board, more days of the week are added to accommodate. With their distribution expanding to St. Albert, Spruce Grove, Sherwood Park, and even to rural cities in Alberta and to Red Deer and Calgary, you really start to wonder how much more they can do in such a small room!

Absolutely loved learning about the tortilla making process! At the end of the tour, we were able to buy fresh tortillas and sample their (extremely) addictive tortilla chips. I can tell you that my bag of their spicy tortilla chips didn’t last the weekend. I also nabbed myself some yellow corn tortillas to bring home, assured that they’ll keep in the freezer for a few months. If I had any gluten-free guests, bam! So easy. Also love the fact that one tortilla is also only 50 calories! (60 calories for the white corn tortilla, but more fiber).

Tortilla El Mercado’s factory isn’t open the public but they hope to host more tours soon. They unfortunately also do not sell tortillas directly out of the space, much to the disappointment of a lot of people I’m sure! You can find a listing of all their distributors on their website and follow them on Facebook to hear about upcoming events. Not only that, absolutely love that they frequently post links to creative taco or tortilla recipes! Thanks so much to the family, friends and volunteers that made the tour possible!
Tortilla El Mercado Inc.
www.tortillaselmercado.com
Advertisement