Elm Cafe opened up their doors at their separate Elm Dining Room last Friday for a “Sausage Stand” event. Chef Allan Suddaby provided diners with a choice of three handmade, classic Austrian sausages, each dish for the lowly cost of $12, and that included multiple side salads and a bun. His experience working in Austria, definitely was showcased that night. After running this dinner date idea with Joe, Sharon, and even my mother (she’s a fan of German sausages) to no avail, Jody came to my rescue! Jody was my partner in crime in NAIT cooking courses last year, and having recently moved to the north side of Edmonton, I’ve got a new food friend!

The Elm Dining Room was a little hard to find at night, and little to no signage indicated that there was an event there. Felt very discrete. Available for private parties, birthdays, catered events, the room seats roughly thirty people. The geometric ceiling and complementing chairs were the most notable decor of the room. Menu for the night was simple, but all three options sounded delicious. Austrian beer, wine, and schnapps was also available for pairing. 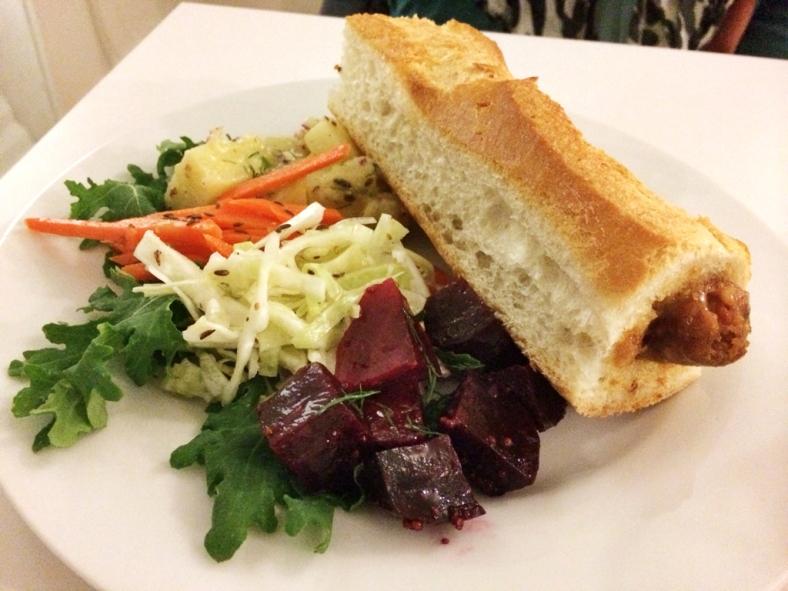 Jody chose the Käsekrainer right off the bat. I don’t blame her. Anything stuffed with cheese should be a clear winner. If poutine was representative of Canadian food, then this is Austria’s contribution to the world for street food. Filled with cubes of Sylvan Star gouda cheese, this was absolutely delicious. What’s even more impressive is that the baguette was intact and not sliced. That’s right, the sausage is inserted into the bun, after a good spread of grainy mustard. Pretty convenient. The sausage was moist, well seasoned, and a steal for $12!

I was tempted to order the same thing as Jody, but knew it just didn’t make sense from a blogger perspective. It bothers me to order the same dish as somebody else! So I ordered the Leberkase, something a little different. Made with cured beef, pork and onions and formed into a meatloaf, the sliced “sausage” was seared and served on a kaiser bun, which was forewarned by our server. Definitely unique, the texture being more of a sausage without a casing rather than your standard meatloaf. I had a different mustard spread on my bun than Jody’s, a little less intense. Mmm, if Chef Suddaby ever opened up his own sausage stand, I’d be the first in line. That’s all I have to say.

Close Up of Sides

The side salads were just as noteworthy as the sausages in my opinion, although they could have been easily overlooked. Four distinct salads were on both our plates: a potato salad, carrots, a slaw, and beet salad. My favorite was the potato salad, lightly dressed in a honey mustard dressing and dill. The strongest in flavor were the carrots, simply seasoned with caraway seeds, which in itself is a very pungent, anise-type flavor, confirmed by Chef Suddaby himself. Normally beets aren’t my first choice of vegetables, but both Jody and I enjoyed it immensely. 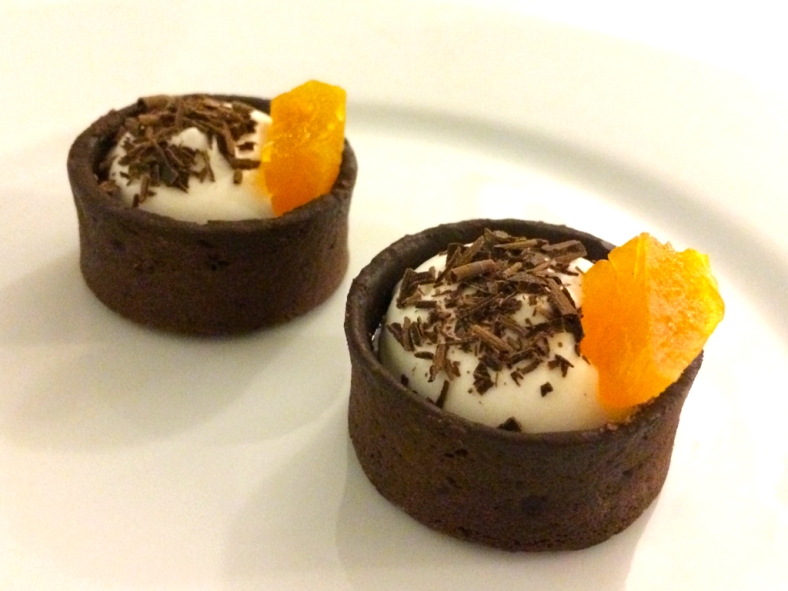 Our meal ended with a nice surprise: complimentary dessert of chocolate crust, filled with chocolate mousse, housemade whipped cream and dried apricot. Yum! Not overly sweet, it was a great way to end the meal. The meal was so delightful that it got Jody and I discussing on sausage making. We both have Kitchenaid mixers and a sausage attachment could easily be purchased. Next week we’re planning on making our own cheese, so we’ll see how that goes first. Fantastic that Chef Suddaby is also a blogger, sharing recipes and tips, and oh look at that, a Käsekrainer recipe! Paired with his potato salad recipe! PERFECT. Wished one of us had taken the sausage making course at the annual Eat Alberta! Perhaps this year. Great meal, for great value! I can’t wait until the next event by Elm Cafe. I’ve already missed out on an Austrian dumpling night last November! Follow them on Facebook or Twitter for news.